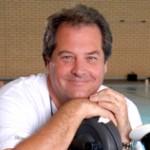 It’s been more than 20 years since film director, Nicolas Roeg, gave Mike Valentine his first break filming Oliver Reed and Amanda Donohoe in Castaway. “I was in the Seychelles for almost two months, shooting and directing all the underwater sequences from a script that contained only two lines of description. The result was more than six minutes of screen time, something I still feel lucky to have achieved at that time” Valentine grinned. This achievement was remarkable because Valentine had just given up his “safe” day job as a senior sound technician with the BBC to work as a freelance underwater cameraman.

“I found it ironic that my first professional job was in the Seychelles, because this was where I first experienced scuba. In 1977, during a holiday there, I noticed a sign saying ‘Visit the Underwater World for US$20’. It was the best 20 bucks I have ever spent. I was instantly hooked. So, as soon as I got back to the UK, I joined the United London Hospital Diving Group—a local BSAC (British Sub Aqua Club)—and learnt to dive. The thing with diving is that it can really bite you, and I soon discovered I wanted to share this new world with as many people as possible. The obvious answer for me was to start making underwater films, so I stole a friend’s camera for a couple of weeks, one which had been used by Cousteau on some of his underwater documentaries, and off I went.”

Eventually, armed with Silent World, Valentine knocked on the door of BBC Acquisitions and showed them his 6.5 minute Red Sea mini epic. After shooting another ten films, he was given an offer he couldn’t refuse, to take his underwater expertise to the Seychelles to work on Castaway.

Mike Valentine worked on these films

2011 Pirates of the Caribbean: On Stranger Tides (underwater camera operator)

2007 The Seeker: The Dark Is Rising (director of photography: underwater unit)

2005 The Hitchhiker’s Guide to the Galaxy (underwater camera operator)

2002 The Importance of Being Earnest (underwater camera)

2000/I The Beach (underwater director of photography)

1999 The World Is Not Enough (additional underwater photographer)

1997 The Mill on the Floss (TV Movie) (underwater camera operator)

1996 Twelfth Night or What You Will (underwater camera operator)

1990 Killing Dad or How to Love Your Mother (underwater camera)